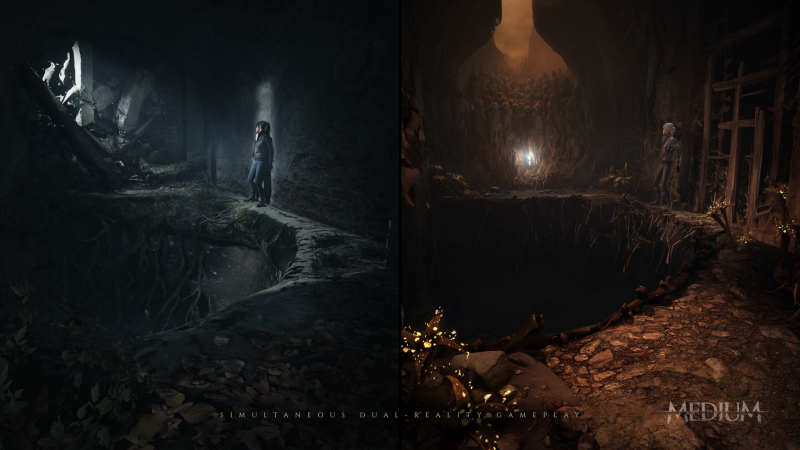 When The Medium was first revealed, it looked like a frankly awesome mix of Alan Wake and Constantine and the level of psychological intanglement immediately had horror fans excited. Now we have a new look at what sort of horrors await with the new “It Came From the Rage” story trailer introducing the origins of The Maw.

Bloober Team’s upcoming tale promises to be terrifying, dark, and aims to mess with the player’s mind in more ways than one. One of the many terrors players will face is a nightmarish entitity called The Maw. The Maw is the primary antagonist for the game and is voiced by industry favorite Troy Baker.

Not only does the above video dive into The Maw’s origin story, but it also offers a new look at Sadness, “a mysterious masked girl who resides at the abandoned Niwa Hotel.”

Wojciech Piejko, the lead game designer for The Medium, previously described the focus for The Medium as deeply psychological, saying: “Each of our games, from Observer to Layers of Fear to Blair Witch, has a central theme that drives its creative and technological design – and in The Medium we focus on this. When you change your point of view, you discover new truths far different to what you had originally perceived.”

The Medium, according to Bloober, is the studio’s most ambitious project yet and will task players with surviving in not one reality, but two simultaneously.  With a soundtrack co-composed by Silent Hill’s Akira Yamaoka, this chilling adventure could be the next big thing in horror if it lives up to its promise.

As for the journey itself, the story follows Marianne, a character that is plagued by terrifying visions that blend two realities. There’s the reality we know and see everyday, and then there is the reality that belongs to spirits and very dangerous things that go bump in the night. As her visions progress, Marianne will travel to a Krakov, Poland hotel that is the home to a horrifying tragedy and it is there that she must unravel the mystery that plagues her.

Thoughts on the It Came From the Rage trailer for The Medium? How are you feeling about the dual realities? Sound off with your thoughts on the latest look inside Bloober’s upcoming horror tale in the comment section below.

Fan-Made 2D Remake Of Metroid Prime Has A Playable Demo

Bad Camera Controls Are Perfectly Framed In This Hilarious…

Crash Bandicoot 4: It’s About Time Rated for PS4, Xbox One

Xbox and Bethesda Partnership is About “More Than One System…

Little Nightmares 2 Demo Now Available On PS4 And Xbox One